These events are compiled from publicly available information and submissions, and are not associated with dontcallthepolice.com.

Please note! All events are listed at the time local to the organizer – please check time zones.

UBC’s Social Justice Institute’s Graduate Student Association invites you to a panel series on Abolition and Transformative Justice. This series was created to engage with the broader UBC community around anti-Black racism following recent instances of racial profiling on campus, and to consider how UBC must divest from policing and surveillance practices that are rooted in systemic racism. We hope that through this free speaker panel, reading group, and creative dialogue series, we can invite UBC students and faculty as well as communities from so-called Vancouver to learn about Abolition and bring these conversations into our communities so that we can end racial profiling on campus for good.

The event series is free and intends to help the UBC community at-large gain tools to combat anti-Black racism on campus as we reflect on Canada’s histories of colonialism, surveillance, policing, and incarceration. 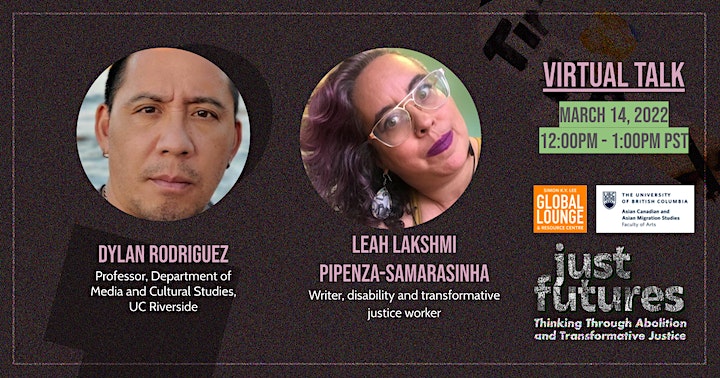 Dr. Dylan Rodriguez is a teacher, scholar, and activist. He was named to the inaugural class of Freedom Scholars in 2020 and is Past President of the American Studies Association (2020-2021). He has worked as a Professor at the University of California, Riverside since 2001

Dylan is the author of three books, most recently White Reconstruction: Domestic Warfare and the Logic of Racial Genocide (Fordham University Press, 2021). He is a founding member of the Critical Ethnic Studies Association and Critical Resistance, a leading carceral abolitionist organization. He is part of the Abolition Collective and Scholars for Social Justice, and continuously works in and alongside various radical movements and collectives.

Leah Lakshmi Piepzna-Samarasinha (she/they) is a nonbinary femme disabled writer and disability and transformative justice movement worker of Burgher and Tamil Sri Lankan, Irish and Galician Romani ascent. They are the author or co-editor of nine books, including (with Ejeris Dixon) Beyond Survival; Strategies and Stories from the Transformative Justice Movement, Tonguebreaker, Care Work: Dreaming Disability Justice, and Bodymap. A Lambda Award winner who has been shortlisted for the Publishing Triangle five times, they are the 2020 Jean Cordova Award winner “honoring a lifetime of work documenting the complexities of queer experience” and are a 2020 Disability Futures Fellow. Raised in rustbelt central Massachusetts and shaped by T’karonto and Oakland, they currently make home in South Seattle, Duwamish territories. brownstargirl.org

This event was funded by the AMS Global Fund and UBC Asian Canadian Migration Studies.

Accessibility Note: ASL Interpretation will be available at the event.

This panel series is organized on the unceded territories of the xʷməθkʷəy̓əm (Musqueam), Sḵwx̱wú7mesh (Squamish), and Sel̓íl̓witulh (Tsleil-Waututh) Nations

To submit your event, please send the event name, description, instructions for registration and/or attendance, the organizer’s name, and organizer’s website to: calendar@dontcallthepolice.com